The centerpiece of the legislation is a permanent reduction of the corporate income tax rate from 35% to 21%. Among other business provisions are a shift to a territorial tax system (in which businesses pay taxes only on U.S. income), incentives to repatriate foreign profits, repeal of the corporate alternative minimum tax, and a 20% deduction (through 2025) on certain income from pass-through businesses such as limited liability companies.

While most corporate provisions are permanent, the following provisions for individual taxpayers apply only to tax years 2018 through 2025 unless indicated otherwise.

The legislation replaces five of the seven current marginal income tax brackets (10%, 15%, 25%, 28%, 33%, 35%, and 39.6%) with corresponding lower rates (see chart). The legislation also establishes new marginal tax brackets for estates and trusts, and replaces existing “kiddie tax” provisions (under which a child’s unearned income is taxed at the parents’ tax rate) by effectively taxing a child’s unearned income using the estate and trust rates.

The law repeals the deduction for personal exemptions. For many families, this should be balanced by the higher standard deduction and/or increased child tax credit (see below), but families with three or more dependents ages 17 or older may see a negative impact.2 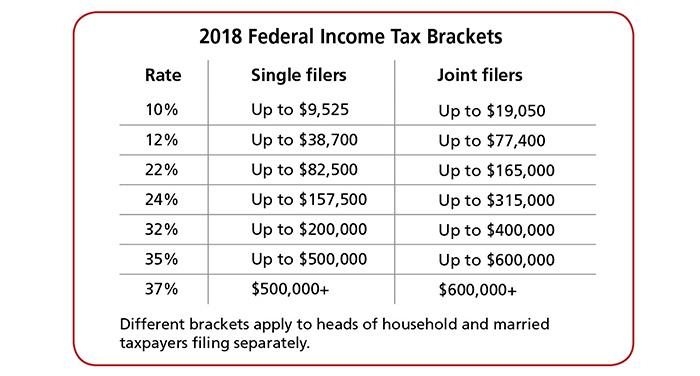 The overall limit on itemized deductions that applied to higher-income taxpayers (commonly known as the “Pease limitation”) is repealed, and the following changes are made to individual deductions:

Home mortgage interest — Qualifying mortgage interest can be deducted on up to $750,000 of mortgage debt ($375,000 for married couples filing separately). For debt incurred on or before December 15, 2017, the prior $1 million limit will apply. No deduction is allowed for interest on home equity indebtedness.

Medical expenses — The adjusted gross income (AGI) threshold for deducting unreimbursed medical expenses is retroactively reduced from 10% to 7.5% for tax years 2017 and 2018, after which it returns to 10%. The 7.5% AGI threshold also applies for purposes of calculating the alternative minimum tax (AMT) for the two years.

Charitable contributions — The 50% AGI limitation for deducting certain cash gifts is increased to 60%; other limits generally remain the same.

The income level at which the child tax credit begins to phase out is significantly increased to $400,000 for married couples filing jointly and $200,000 for all other filers. The credit will not be allowed unless a Social Security number is provided for each qualifying child.

A new $500 nonrefundable credit is available for qualifying dependents who are not qualifying children under age 17 (e.g., college students).

The AMT is a separate, parallel federal income tax system with its own rates and rules; for example, the AMT effectively disallows the standard deduction and some itemized deductions. The legislation reduces the number of taxpayers subject to the AMT by increasing AMT exemption amounts and the income threshold at which exemptions begin to phase out.

Other Changes of Note